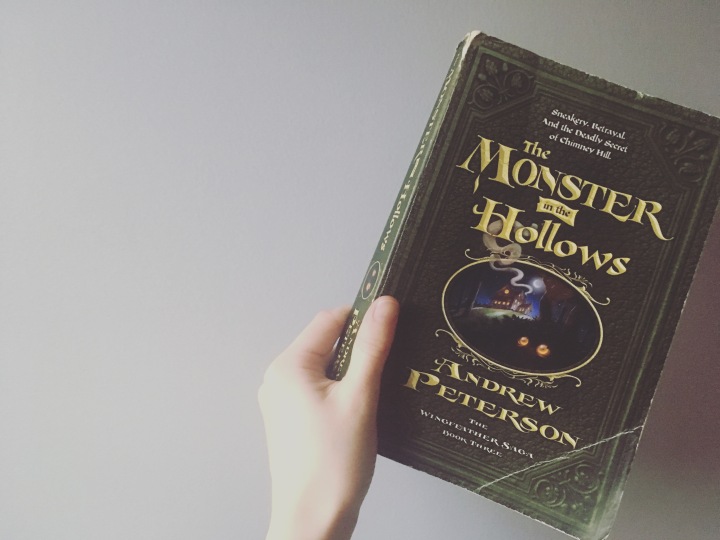 “It took a few days to realize the light was coming from her. She was shining it. Janner Igiby had changed her. He was gone, but he had left some of his gift behind.”

Monster in the Hollows

The Wingfeather family, formerly known as the Igiby family, is tucked away temporarily in the Green Hollows, where the Fangs are more scarce and normalcy seems as though it might be attainable, even if only for a short time. Problems rise though, as evil becomes more than the Fangs, and a silent threat, greater than any they have encountered prior, grows right beneath their noses.

Andrew Peterson is a man of many talents. His music is well known, especially his most recent album, Resurrection Letters, Vol. 1. He is also the proprietor of The Rabbit Room, husband to Jamie and father to Aedan, Asher, and Skye. They live near Nashville, TN.

This one is my favorite in the saga.

It was hard, choosing between this one and the fourth one, but in the end, this one stole my affections.

If I had to choose one word to describe this book, I would say moving.

A resistance building among children who are starting to grasp the magnitude of the evil that surround them.

Another chapter in a legendary, and what was once thought to be lost, love story.

And the three children. The Throne Warden, the High King, and the Song Maiden. The jewels of Anniera, growing in stature, humility, and the unity that is required to fight Gnag the Nameless and bring peace back to the lost world of Erwear.

My favorite character rises to the center stage in this installment: Sara Cobbler. The quiet, but passionate resistance leader with motherly affection for the hurting children around her. Janner and Sara have influenced each other strongly, spurring one another on to fight for what is right, regardless of the cost.

This lesson goes deeper than just the fight against Gnag. Character is built partially by the stories we read and tell. When you read about Janner and Sara’s dedication, and passion for what is right, it’s contagious. It begins to affect you. You start to see the things in your life that are important, the ones that are costly to fight for.

Walking away changed from a story, is the best way to walk away.

Peterson’s work is remarkable, this book is no exception.

This series grows increasingly more sad. Death, evil, and sorrow rise in this third installment, but take heart. The victory is at hand, and so very worth the journey there.

Here at The Corner Shelf you’ll find Monster in the Hollows on The Top Shelf.

4 thoughts on “{Book Review} The Monster in the Hollows”

Madelyn is an Early Childhood Major and piano teacher from Ohio. She enjoys theological discussions, reading spoilers for movies, frequenting coffee shops and bookstores, and encouraging others to look to Jesus as He has revealed Himself in Scripture amidst the chaos of life.