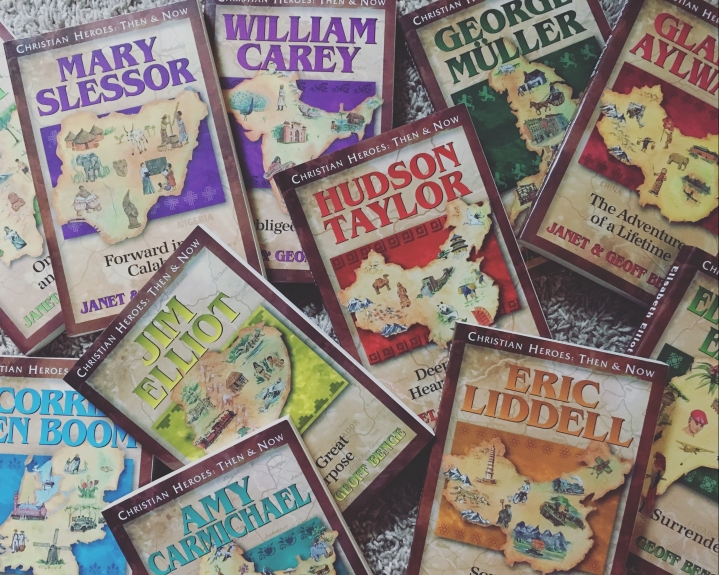 As saints of old still line the way,
Retelling triumphs of His grace,
We hear their calls and hunger for the day
When, with Christ, we stand in glory.

The Christian Heroes Then & Now Series, are the individual stories of Christian heroes from the past and present day, told in a true story form that is sure to capture the imaginations of young (and old!) readers! There are forty-seven books in the series, ranging from George Muller to Mary Slessor to Nate Saint. Truly a delight to read, and treasure to have!

Geoff and Janet Benge both grew up in New Zealand. Janet was an elementary school teacher, and Geoff is a history major. They didn’t set out to be writers, but like to say that “writing found them.” They have three children, two daughters and a son. Their books have been shaping children’s lives for years and cultivating a love of Christ and history at a young age.

You can thank my younger sister for this post. Originally, I had The Hiding Place on the agenda for today’s review. One of my favorite books, that will be reviewed next Friday. The plans changed earlier this week when I was sitting on my bed reading, and my nine-year old sister was sitting on hers, trying to do the same.

“Madelyn, I want to read one of your books.” I was puzzled, because in her hands was one of my books… The Mandie Mysteries. “You have one of my books.” I responded. “No, I mean a real one. You know, like a smart book.” I laughed, and then realized what she was trying to say. She wanted a non-fiction book to read, a biography in particular.

The two of us really enjoy listening to radio theatre drama’s together, and recently finished Bonhoeffer from Focus on the Family Theatre a few weeks ago. This was preceded by her listening to The Hiding Place and Grace Victorious, both also produced by Focus on the Family. This has really increased her interest in history, specifically church history, and she wanted books with similar true stories to read.

So, once I understood what it was she wanted, we walked over to the shelf and pulled down a selection of the Christian Heroes Then & Now Series for her to choose from. She is almost finished with Elisabeth Elliot and really hoping to start Nate Saint soon. It is so fun to watch her enthusiasm that reminds me so much of my own when I read the books.

What I love about these books is the way they remind us that facts come from stories, not the other way around. We wouldn’t be able to list three facts about the life and legacy of Mary Slessor, if Mary Slessor had not lived a real life already. That is what these are, real stories of real people, something many dry history textbooks have caused us to forget.

Few things sadden me more when talking to younger children then when they tell me how much they hate history. I want to scoop them up and invite them inside my own two eyes so that they might see it with the same wonder that has only continued to grow inside of me as I have learned more and more. History is truly His Story, they greatest story, the most epic tale, the most thrilling adventure. I hope and pray this next generation following us grows up to see it that way. It changes everything.

I would not only recommend these for children, but for high schoolers, for stay at home moms, for working dads, for grandparents, for everyone and anyone who has lost their love and wonder when it comes to history. Books give us windows. Windows on reality. Windows on the future. Windows on the present. Windows on the past. This series is no exception.

I can’t really give a detailed list of things in this section, considering the fact that there are forty seven books in the series. I will say that since each book is a different man or woman’s story, each person’s beliefs and views are slightly different in one way or another. Keep discussions going always no matter what book or how “clean” it may be. Sometimes the greatest conversations and light bulb moments happen when discussing a book, fiction or non-fiction.

Here at The Corner Shelf you’ll find The Christian Heroes Then & Now Series on The Top Shelf.

A regular girl who teaches preschool, reads too many books at once, and writes here about goodness and beauty in her spare time.